While the sun becomes more and more distant in the final weeks of the year, Brussels allows a fairy-like and unusual atmosphere to envelop parts of the city. At the initiative of the Brussels Ministry of Mobility and Public Works, visit.brussels, with the support of the Brussels-Capital Region and Atrium, coordinates the installation of these large-scale works in the heart of the capital of Europe. A multi-faceted ball, 12-metre tall flowers, giant pocket torches are to be found, among many others... In addition to these works of art placed around the small inner circle, several imposing edifices are taking part in this enlightenment of the Region: the Belfius tower, the P&V tower and the ING Marnix building offer scintillating and colourful projections of light. Whether on foot, by bicycle, public transport or by car, passers by will be able to admire these illuminations.

“The Brussels Region is doing its bit to add some magic to the festive season with a number of stunning light installations all around Brussels. These temporary displays will be lighting up the capital thanks to the support of the government, which is always keen to promote the Region’s image. This beautiful sight will be a real treat for lots of tourists, young and old alike,” enthused Rudi Vervoort, Minister-President of the Brussels-Capital Region.

“The events of the last year have put Brussels in the news. Today, as we work to enhance the quality of our public spaces, we are investing in improving our Region’s image. The lights around the Small Ring and along the canal provide a great opportunity for locals and visitors to meet. During the darkest days of the year, we will be lighting up our city, and this year, we have decided to put Molenbeek under some welcome spotlights. We wanted to change the atmosphere after a year in which attention has been focused on this particular neighbourhood after the terrorist attacks,” explains Brussels Minister for Mobility and Public Works, Pascal Smet.

Didier Gosuin, Minister of Economy and Employment: "I am thrilled with the installation of these illuminations. They make the business centre of Brussels even more attractive for shoppers and tourists. From now on, visit.brussels is the only operator in charge of this work. Note also that an overall, regional "lighting" plan is being prepared for installation in several phases. It includes year-end lights, a lights festival and the illumination of works of art and edifices. The objective? Boost the image of Brussels and the business of our commercial centre."

Here is a list of illuminated works and edifices to admire all along the Brussels inner circle. 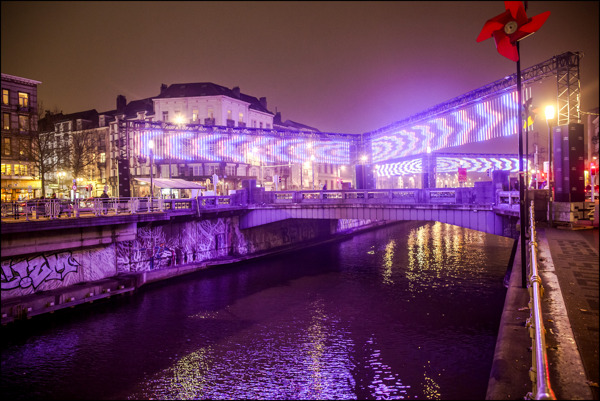