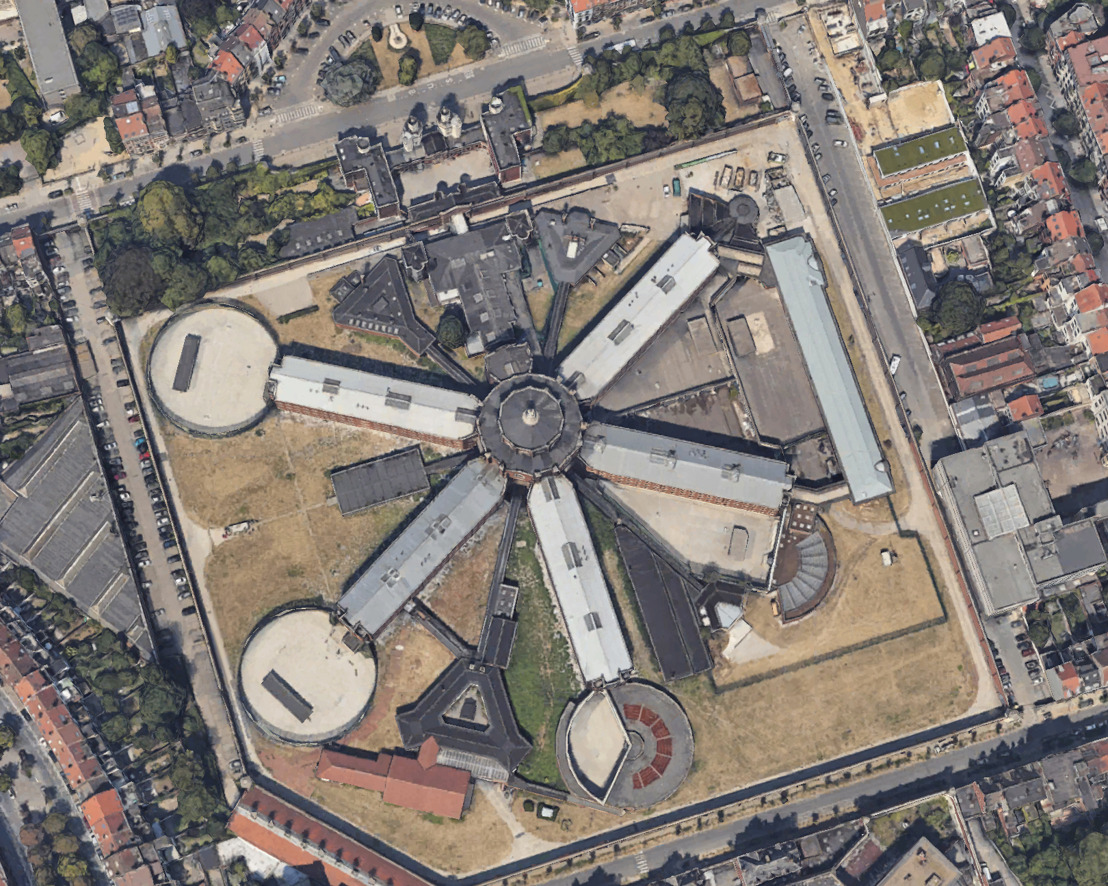 Minister-President Rudi Vervoort has recently sent a letter to the federal government requesting more information on the future plans and timing for the release of the complex. In this letter, Vervoort stresses the Region wants to avoid the deterioration of this symbolic location.

“The federal government has indicated that it wants to transfer prisoners from the Saint-Gilles prison to the one of Haren from 2022. Thanks to its unique heritage value and location, the St-Gilles prison site has great potential to become a beautiful new city district. We are already preparing this future by protecting specific prison parts to integrate them into the future project. The entire enclosure wall of Avenue Ducpétiaux is now permanently protected. The same applies to the watchtowers, the entrance gardens, the central core, the entire chapel and the first bay of the cell wings connected to it. This site can show us that heritage and contemporary architecture can go perfectly together. This future city district has the potential to surpass by far the Groen Kwartier of Antwerp, which should also be our ambition,” says Pascal Smet.

In order to prepare this project as well as possible, the Brussels Region has urged the federal government that it wants to become the owner of the site quickly. Moreover, the conclusions of a feasibility study show that the main buildings are suitable to be converted into housing and facilities, while also respecting the heritage. Since the permanent transfer of all prisoners would be completed by 2024, it is now time to start concrete discussions. The Region anticipates in order to prevent the zone from becoming a vacant, wasted urban area.

“I am pleased that this protection confirms the ambitions of the Brussels Region since 2015 in a definition study for this site. We aim for a mixed, balanced and integrated project in accordance with the heritage values of the site. I have reminded the federal authorities of this in a recent letter. From now on, I am counting on close cooperation between all the partners so that we can work together to make these ambitions come true,” says Rudi Vervoort.

The municipality of St-Gilles also shows enthusiasm about the protection.

“I welcome this protection requested by the municipality of Saint-Gilles. This is a unique heritage. I hope it will be a source of inspiration for those designing the site when the prison closes,” says Charles Picqué, Mayor of Saint-Gilles.

Architect Joseph Jonas Dumont designed this vast complex in Tudor Revival architecture. His colleague François Derre constructed it between 1878 and 1884.

The design of this and several other Belgian prisons was based on Anglo-Saxon criminological theories, developed by Édouard Ducpétiaux.  The system used is a panopticon, in which the organisation of the spaces is focused on an optimal central surveillance of all prisoners.

The complex is delimited by a rectangular enclosure wall with a bevelled corner on the south side and flanks Avenue Ducpétiaux and Place Antoine Delporte, where the entrance is located.

For the enclosure wall at Avenue Ducpétiaux, Gobertange stone is used. This makes it look like a small medieval fortress. A Lombard band, referring to machicolations on corbels, dictates the rhythm of the walls, which have an cordon upper side.  The entrance faces Place Delporte and has a central porch under a drop arch with a carved gate, while two polygonal crenellated towers with embrasures and spyholes and watchtowers above border it. On either side of the entrance are two two-storey pavilions in an L-shape and with a turret. Above their barred windows, they contain a drop arch and a profiled water table. The street side facades have windows in a monumental frame. The porch was originally designed as gatehouse and opens onto a courtyard with the homes of the director and the head prison officer on the left and the home of the deputy director on the right. The brick facades contain wall openings with a pointed arch above in a hardstone frame under a cordon.

At the entrance, the avant-corps of single-storey prison buildings contains a refectory for prison officers and a waiting room for visitors. Several spaces are connected to a corridor that leads to the heart of the complex and is rhythmed by pointed arches on monolithic bluestone columns with a polygonal plinth. The corridor leads to the twelve-sided central surveillance centre, which has a high elevation and large pointed windows with tracery. The twelve sides are crowned with gables, while the building itself is crowned with a recessed storey with a chapel, under a conical roof and a tall skylight.

Five wings start from the central core, between which are situated the kitchen, butcher's, infirmary and laundry. A long corridor connects these spaces. Each wing has three storeys with 120 cells on either side of a central gallery. The side facades have barred windows under a white stone lintel.