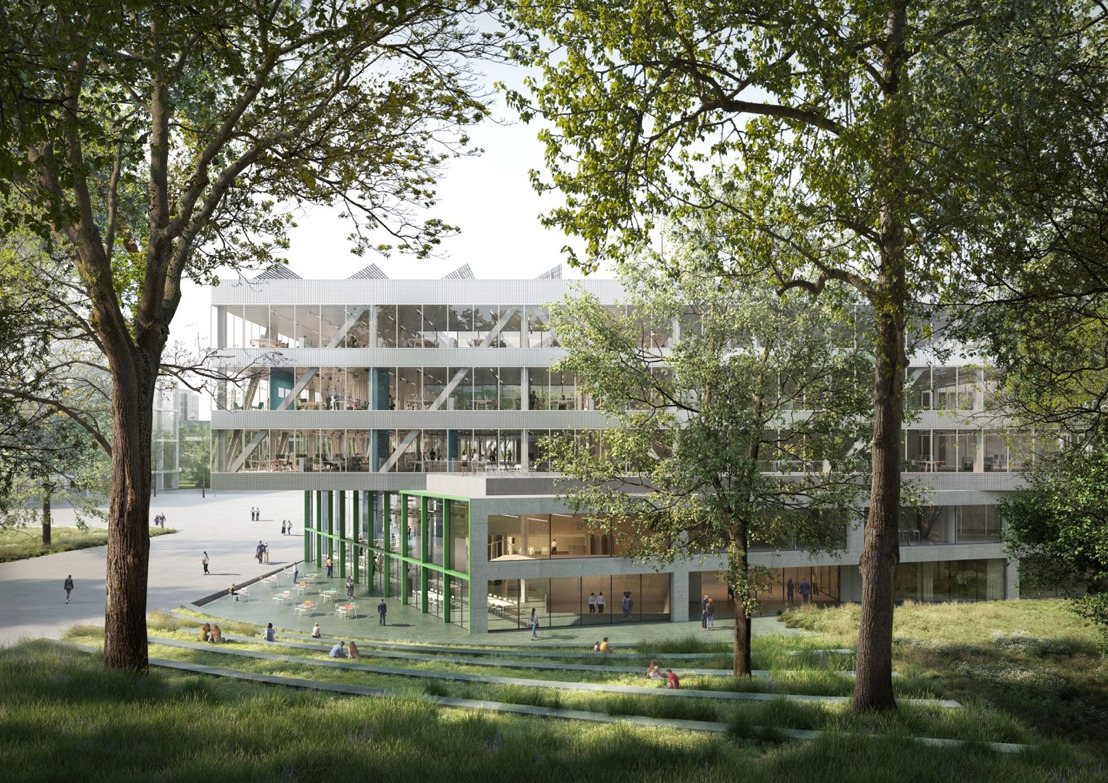 Pascal Smet, Brussels State Secretary for Urbanism and Heritage: “Mediapark will become Belgium’s media and creative hub. Broadcasters VRT and RTBF will obviously play a central role in the future of this vibrant media district and will bring a lot of audiovisual talent with them. The open design of the new VRT building symbolises its open and future-oriented vision towards the neighbourhood and the city. As the Brussels Region, we cooperated very closely with VRT during preparations and I am convinced that Brussels and VRT will continue to strengthen each other in the future.”

Rudi Vervoort, Minister-President of the Brussels-Capital Region: “Mediapark.brussels is the Brussels Region’s urban planning project that transforms the current, closed site of the Flemish and French-speaking public broadcasters into a real Brussels district. An open district built around a large 9.5-hectare public park with the new VRT building and the VRT tower as landmarks. A district deliberately designed with different functions such as housing, shops, schools and businesses, responding to the needs of both Brusselers and commuters. Also a district focused on the media and creative sectors, because the Brussels Region wants to synchronise with the flourishing of these sectors to push forward its overall development.”

Frederik Delaplace, ceo of VRT: “The new VRT home will be the final piece of the innovation process we are undertaking with the Flemish public broadcaster. In a few years, there will be a whole new VRT: a modern public broadcaster in a fresh and open building that encourages cooperation, innovation and connection.”

Frieda Brepoels, chairperson of VRT’s Board of Directors: “The new building on Reyerslaan will stand out in an urban environment of residential towers and office buildings because of its low structure and horizontality. This makes it an inviting building for all Flemish people, without a fence around it and with various views of our capital. VRT strongly opts for a modern and flexible building, where a shift to communal areas encourages even more to work together. Several more exciting construction years will follow. I am greatly looking forward to them from my training as an architect.”

Construction of the 65,000-square-metre new VRT building will start in November on the site behind the current VRT building, which will be demolished. Cooperation will play a key role in this horizontal building with a ground floor with mezzanine and three upper floors. The spacious work floors have room where the employees of the various departments can exchange thoughts. 5 indoor gardens and 5,000 square metres of green space will embellish both the interior and exterior. Finally, the new construction will be 100% fossil fuel free and a well-insulated building envelope is used, minimising the need for heating. Instead of natural gas or fuel oil, geothermal energy and solar panels will ensure the heating.