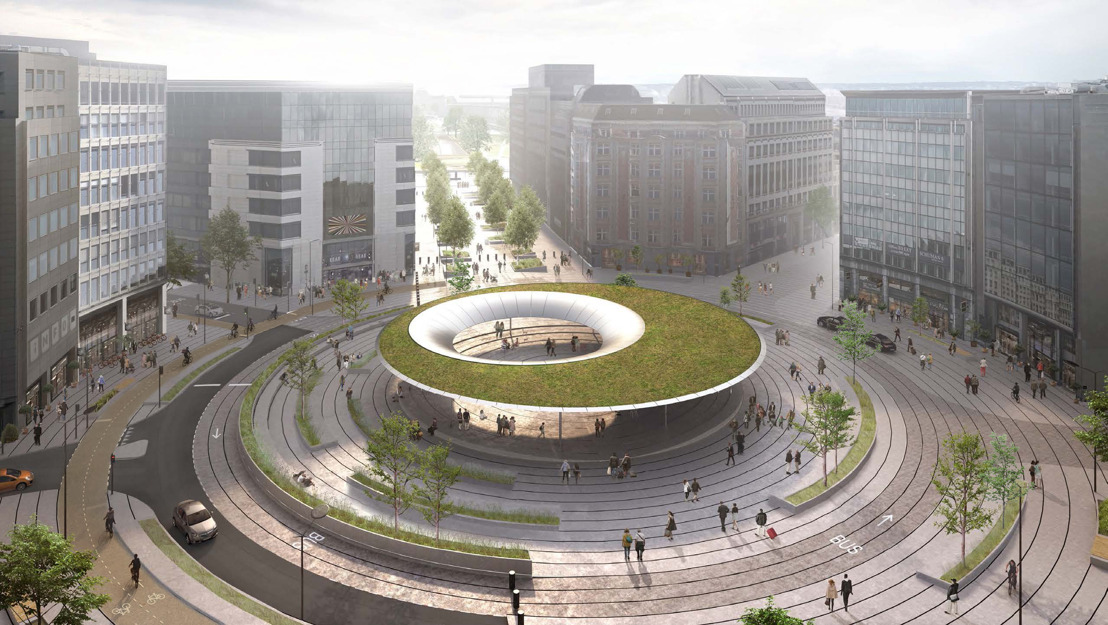 "It is essential that the Schuman roundabout becomes a public space of greater quality, a place where citizens come together, a symbol that beats as the heart of the European institutions and, even more, of the European project. As with other structural projects, mobility poses a major challenge because of the great pressure of metropolitan and local traffic. Therefore, to make this a success story, the impact of the changes on traffic flow and on the accessibility of neighbourhoods will be closely monitored. The Region will give attention to this in consultation with all partners,” said Brussels Minister-President Rudi Vervoort.

“The Schuman square is one of the reasons why I entered politics,” said Brussels State Secretary for Urbanism Pascal Smet. “In my view, one of the most important places in Europe, with great potential, was completely neglected. In 2015, Rudi Vervoort and I secured a first major victory in this file and reached a political agreement to transform the square in an ambitious way. Since then, I have not let go of the project. It used to be a square to which you would turn your back to as quickly as possible and it will now become a place to stay. A place where Brusselers, European officials and visitors can connect with each other. It will also become the new gateway to the beautiful Cinquantenaire Park.
The new Schuman Square will become a symbolic place in the heart of Europe, Belgium and Brussels, that will be known all over the world. A symbol for the unity of Europe and a symbol for the transformation of cities.”

“Brussels is changing and the Schuman square is a great example of this! The square will no longer be a grey transit traffic area. I am pleased that, despite the technical underground challenges, we have been able to go for a greener project. A lot of new space will become available to engage with each other, relax, interact between residents and users. Traffic flow will remain possible from Avenue de Cortenbergh to Rue de la Loi, but there will also be cutoffs on the square so that pedestrians, people with reduced mobility, cyclists and public transport will get the space they deserve, which will also improve road safety.  Finally, the Schuman square redevelopment is also a crucial link in the improvement of the important cycle axis along rue de la Loi, which already provides motivation to address that part thoroughly as well!” said Brussels Minister of Mobility Elke Van den Brandt.

“This important intersection in our capital city needs a thorough redevelopment and I am pleased that Beliris is in charge of the implementation of this project.
I am convinced that this will be carried out very well thanks to the expertise of Beliris with the works in the neighbourhood near the Schuman metro and train station," said Minister Karine Lalieux, responsible for Beliris. “This project is fully in line with the federal government's objectives of promoting soft and active mobility. Every effort is being made to ensure that the site runs as smoothly as possible, with as little impact as possible on the residents and users of this major traffic axis in our capital.”

"Together with my colleagues from the Region, we are very pleased that we will soon be able to start the redevelopment works of the Schuman square, thanks to the permit granted. The City of Brussels, capital of the European Union and home to 184 nationalities, can only welcome its consolidation as the heart of the European Quarter. This project is also about improving a district 10 minutes away from all the facilities for its residents, by creating a welcoming space for relaxation and socialising between the different neighbourhoods,” said Philippe Close, mayor of the City of Brussels.

The result of an intensive, inclusive and ambitious process.

In 2015, Pascal Smet and Rudi Vervoort reached a political agreement to thoroughly redevelop the Schuman square in the heart of the European Quarter in Brussels.
That same year, Brussels Mobility launched an international architecture competition, in which more than 20 firms participated. The competition was supervised by the Brussels chief architect. Five firms were selected to submit a design. In 2017, the design by the Danish architectural firm COBE and their Brussels colleagues BRUT was chosen as the winner.
COBE, with headquarters in Copenhagen, is a major international architectural firm that has won several awards. BRUT is a young Brussels office with ambitions for quality public space in the city.

After various workshops and consultations with residents, traders and people who use the square, the original design was fine-tuned by the team of architects, in close cooperation with Brussels Mobility and Beliris.

In 2019, Brussels Mobility submitted a permit application. The project then went through the urban planning procedure, including the public consultation and the advice from the consultation committee. In April 2021, after consultation between Pascal Smet, Elke van den Brandt, Philippe Close and Ans Persoons, the decision was made to adjust some aspects of the project. The urban planning administration urban.brussels, in consultation with Brussels Mobility, then formulated an official question (article 191 of the Brussels town planning code) to Brussels Mobility. Among other things, the possibility of providing more plants and planting additional trees in the square had to be examined, as well as ensuring access to the square for people with reduced mobility and the visually impaired.

As regards mobility, it was proposed to reverse one-way traffic between Cortenbergh and Petite rue de la Loi in order to better manage the car flow and to connect a two-way cycle path to Avenue de la Renaissance.

Based on these questions, Brussels Mobility submitted an adapted proposal in October 2021.
Urban.brussels now concludes, taking into account that a large train and metro station is located under the square, that Brussels Mobility sufficiently responded to the additional questions raised in April. In accordance with the political decision, the urban planning administration grants a planning permit for the project and thus gives the green light for the Schuman square redevelopment.

Beliris, the public body for construction in Brussels, plans to start the works at the end of 2022.
Furthermore, the project has been included in the federal government's recovery plan, as a result of which it can count on 21 million euros of European funding.

Design with a vision

The design’s general philosophy reflects the central location of the Schuman square and is based on concentric circles, which recur throughout the whole design. The centre of this urban quare will be covered be a round, metal canopy under which visitors and residents can enjoy a pleasant break.

There will be a large pedestrian area around the square, with benches, bushes and almost 100 trees. The Petite rue de la Loi area will also be completely redesigned. This way, the Cinquantenaire Park will be connected with the square and it will be possible to have a lovely walk from the park to the Council and Commission buildings. The new Schuman square will thus form the entrance to the Cinquantenaire Park. Car traffic is limited between Avenue de Cortenbergh and Rue de la Loi. A safe, ochre cycle path will connect these two axes.

The steel structure in the lower centre of the square will reflect both square and people and will become a new eye-catcher in the city. A green roof will be installed on top of this mirror structure.
The new Schuman square is designed in such a way that activities and events can be organised in a practical way.