The Square Vanderkindere is currently badly organized; the traffic flows are sometimes quite chaotic, because of the tramway stop at the very center of the square. Hence why the entire junction will be redesigned. It will have an oval shaped roundabout and its traffic lights will disappear. All road users, in particular pedestrians and cyclists, will find themselves moving much more safely. The junction’s capacity remains identical.

To make sure traffic can move smoothly, the tramway line 92 stop in the direction of the city center on the Avenue Brugmann will be moved into the direction of the tramway stop Ma Campagne. That way, the Vanderkindere crossing will become less crowded. “The local shop-owners and the municipality have specifically insisted to maintain the pedestrians crossing at the junction on and to Rue Vanderkindere.  We have heard their questions and will accommodate their needs”, Brussels Minister Pascal Smet continues. “Their proposal will be tested in practice upon completion of the construction works. If the security or the free flow of traffic appears to be compromised, the test will be evaluated.”

This summer, STIB/MIVB will renew the tramway rails at the Square Vanderkindere, making the site less noisy. Upon completion of those works, Brussels Mobility will refurbish the entire square. In Spring 2016, all works on the square should be finalized.

Once the reconstruction of the Albert end stop is completed, the Churchill-roundabout will come next. The number of parking places will remain the same, but they will be situated further down the road, thus freeing up space to create a cyclists’ and pedestrian area. Trees will be planted and secured pedestrian crossings will be installed. “This is a true cyclists crossing road that interconnects different regional bicycle routes. The public space on and around the roundabout will look so much better”, Mr Smet adds.

In anticipation of the bigger construction works, Brussels Mobility will soon install temporary infrastructures to increase safety for pedestrians heading for the tramway end stop.

“My sincere thanks to the municipality of Uccle for the positive, constructive dialogue”, Mr Smet expresses his gratitude. “Together we have come to a solution that improves comfort for all road users, without leaving anyone behind. The reconstruction works will give the local residents a more pleasant and safer neighbourhood.”

The mayor of Uccle, Mr  Armand De Decker, is a happy man. “The refurbishing will make the Square Vanderkindere more attractive, without any concessions in the field of mobility.” 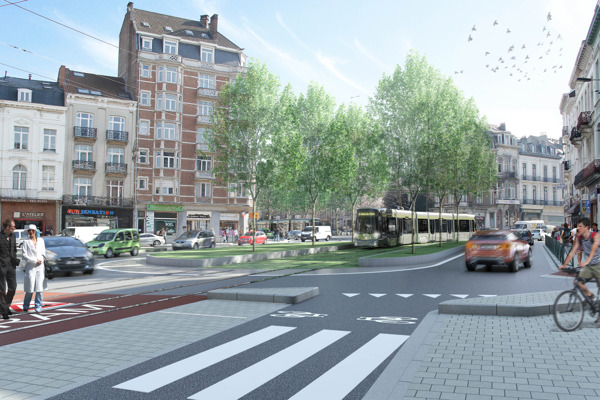