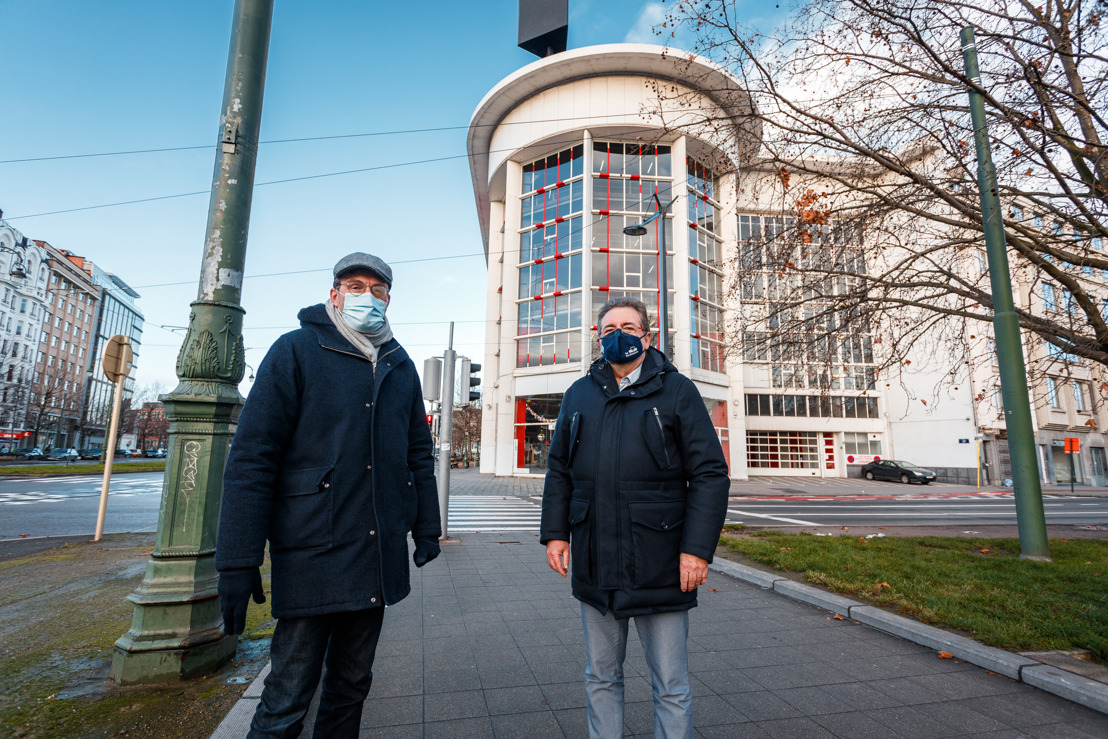 This way, the project initiated by the Vervoort government in 2016 will become concrete. Minister-President Rudi Vervoort is delighted:

“The delivery of this permit really initiates the construction of Kanal and I am very pleased with that. With the renovation of the whole, our Region will be a reference in the cultural landscape. Kanal will be a museum of international renown that will at the same time provide a showcase for Brussels artists of all sorts. It will also bring together the citizens of the many cultures in our Brussels Region. Furthermore, Kanal will be a place where the Brusselers and imagination will interact, where we can dream in an artistic perspective of the urban models of society of tomorrow. A museum pool is to emerge from the works, with the Kanal Foundation and CIVA as its linchpin, and will open to the public in 2024. For us, it is the start of our project for a region that aims to develop our cultural and creative practice.”

"Together with Yamila Idrissi, I called a few years ago for the creation of a museum of modern art in Brussels. According to our proposal, an international competition should be organised for this project.  With this project, culture will become the driving force behind the redevelopment of the Canal Area and the North District.  With its international appeal and local embedding, the museum will become a new meeting place in the city. The museum will give Brussels, as a crossroads of cultures, even more international allure. We are not only developing the museum in this area, but also, for example, the new Beco Park along the canal, the new Suzan Daniel bridge and we are transforming the public space at the Sainctelette square. With the redevelopment of this entire zone, we show that we can realise ambitious projects and continue our work transform Brussels into a 'city for people'," says Pascal Smet.

The project to give the former showroom and workshops of the Citroën garage a new future started back in 2016 under the Vervoort government. The plans for this 1,7-hectare site were submitted for public consultation in September and slightly modified after the consultation committee. Now that the planning permit has been delivered, its new destination, with museums and shared areas, can finally become a reality.

Specifically, the museum of modern and contemporary art will cover 12,000 m² and the international architecture centre 7,000 m². 13,000 m² will be devoted to an internal public space that will provide culture, relaxation, entertainment and education. The latter will also serve as a place where the Brussels inhabitants and visitors can connect with each other. Finally, 9,000 m² will go to common areas such as offices, workshops, auditoriums, storage rooms, delivery rooms, technical rooms and a car park.

The restoration and redevelopment of the main heritage elements of the site, namely the showroom and the workshops, will also receive a great deal of attention. The laureate of the architecture competition insisted on preserving the elements of the past. For example, the showroom will be restored to its original state. The mezzanine floors from the 1950s will be removed and the aluminium facade from the 1970s will make way for a glass and steel facade, based on the original design.

Since the listed building cannot accommodate all these functions, three additional volumes will be added. They will host the museum of modern and contemporary art, the museum of CIVA (international centre for city, architecture and landscape) and finally the shared activities. The volume for the last one will replace the former office building and will be called “Rassembleur”.

“KANAL now has all the necessary authorizations to provide Brussels with a 21st century museum dedicated, in a resolutely multidisciplinary spirit, to modern art and contemporary creation as well as to the rich collections of architecture and urban planning of the CIVA Foundation. This is an important step in continuing to transform this former garage into a place of art, culture and exchange, which will strengthen the cultural attractiveness of the capital, Yves Goldstein, Kanal foundation.”

Moreover, the sloping roof part will become a flat roof, which creates space for a publicly accessible roof terrace. A bar and a covered terrace will be installed under a recessed volume.

Finally, the colour palette and choice of materials will bring Kanal into the 21st century. Over the years, the colours have evolved enormously. They went from dark brown to the current white. Now the structural elements of the building are being reconsidered through colour use. They will be given a dark grey tint, which recalls the colour palette of 1934.