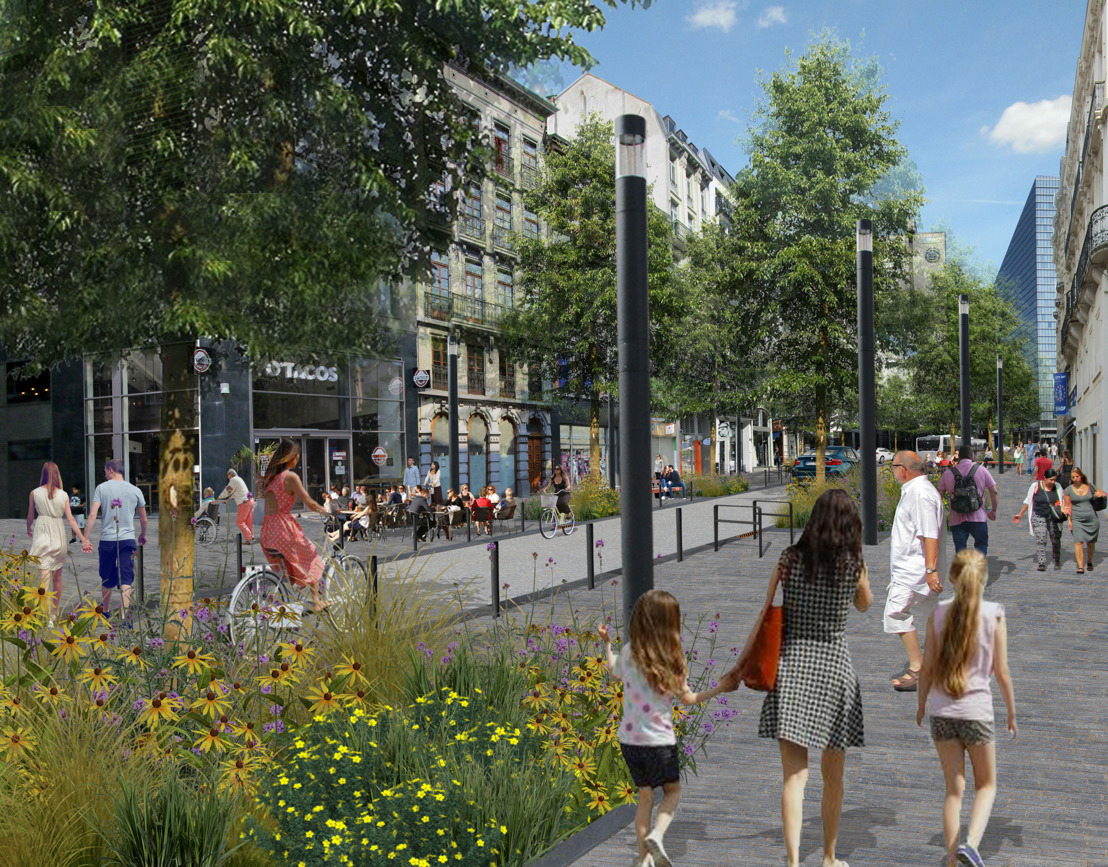 “The construction of the pedestrian area has been a milestone in turning Brussels into a city for people. We have to keep this positive momentum going. The City of Brussels and the Brussels Region are cooperating extremely well on many renovation projects of public spaces and buildings in the city centre. The renewed Boulevard Adolphe Max is a perfect example of this. The new avenue will visually connect the pedestrian area with the Northern Quarter, another strategic district that we are fully upgrading,” said Brussels State Secretary for Urbanism Pascal Smet.

“Now that the permit has been obtained, the Boulevard Adolphe Max renovation can begin soon. After the works, you will be able to stroll along new, continuous spaces from Place Fontainas to Boulevard Adolphe Max. And we are also continuing the city centre renovation with many other projects,” added Brussels Mayor Philippe Close.

The Boulevard Adolphe Max makeover is an important next step in the Brussels city centre renewal. The urban planning departments of the City of Brussels and the Brussels Region work closely together on renovation projects of both public space and buildings.

It goes without saying that the central avenues redevelopment has been an important catalyst for this. Since this radical change, various other street and square renovation projects have been launched, such as the creation of separate cycle paths along the small ring, the Rue du Marché au Charbon and Rue du Jardin des Olives redevelopment, the redevelopment of Rue Sainte-Catherine and its surroundings around the new Brucity building, and the Avenue de Stalingrad redevelopment, once the works on Metro 3 will be completed there. Many buildings have also been or are being thoroughly renovated. Examples are the iconic Bourse building, the Multi Tower on Place De Brouckère and Théâtre des Variétés, located in Rue de Malines, one of the small streets in the area that will be redesigned from facade to facade, together with Boulevard Adolphe Max. Also Rue de la Fiancée, Rue du Finistère, Rue du Pont Neuf and Rue Saint-Pierre will be redesigned.

Ans Persoons (one.brussels-vooruit), Alderwoman for Urbanism and Public Space: “Boulevard Adolphe Max and the adjacent streets were in urgent need of renovation. The new design will connect them visually and spatially to the pedestrian area, but above all, bushes, trees and plants will be added as much as possible. In the current situation, the trees mainly adorn the parking spaces and were planted in flower boxes without space to grow. By limiting space for motorised traffic, it became possible to develop a high-quality landscaping project. The various greenery zones will be designed in such a way that they change throughout the seasons. Special attention will go to planting various types of greenery: high-stem and multi-trunk trees, perennials, ornamental grasses and bulbs. We also hope that the project will boost local commerce and that the Brusselers will rediscover this prestigious avenue and its remarkable heritage. ”

Boulevard Adolphe Max as we know it today dates from 1976. The street was constructed with a lot of space for transit traffic and parking, while pedestrians had to walk on narrow pavements.
As a result of this redevelopment, Boulevard Adolphe Max will regain its former glory. The avenue will be redesigned at the same level from facade to facade. The street furniture style of the pedestrian area, such as street lights and staple bike racks, will also be used here. Cars will have less space, many trees will be planted and there will be wide pavements in bluestone. The avenue will thus become essential in the soft connection between the north and south of the city.