"Place Schuman shows the change this city is making. We are going from a city for cars to a city for people! Schuman will become a real urban square where residents and visitors can meet. Finally this emblematic spot is given the quality and look it deserves. It is now up to the architects to elaborate their projects together with the residents and the European institutions,” says Pascal Smet, Brussels Minister of Mobility.

In December 2015 the Brussels government launched an international competition for a new design of Place Schuman. More than 20 candidacies were submitted, five of which were selected to draft a concrete proposal. An independent jury of experts, presided by the Master Architect Kristiaan Borret, made its choice which was confirmed today by Minister-President of the Brussels Region Rudi Vervoort and Brussels Minister of Mobility Pascal Smet. COBE is a large international office located in Copenhagen and has won several awards.  It is associated with BRUT,  a young Brussels office with a heart for the city.

"The Brussels Government wants to transform the European Quarter and let neighborhood integrate better with the European institutions. Schuman and the European Quarter can become a real driving force for urban development and social cohesion. I am delighted to witness that the dynamics generated as from 2009 by Christian de Potzemparc and the Urban Project Loi are carried on. This high quality redesign of the Schuman square will make it into a meeting spot for residents, the people working at the European Institutions and the tourists.” says Rudi Vervoort, Minister-President of the Brussels Capital Region.

More than a roundabout, Schuman, becomes a real square and urban Agora :

The overall philosophy of the project as designed by the winning offices is inspired by the shape of the European Parliaments’ hemicycle. In the center of the area is an iconic meeting place in the shape of a valley with a metallic structure reflecting the square and the people below.

Around the agora, a large pedestrian area will connect the Cinquantenaire Park to the bridge of Rue de la Loi.  Traffic will still be able to pass from Avenue de Cortenbergh to Rue de la Loi and from Froissart to Chaussee d’Auderghem, but no longer across the square.

«The winning project as proposed by COBE / BRUT shows a fine craftsmanship as it combines of the overall complexity of this mission within a consistent and ambitious project. The new Schuman place will become a pleasant and at the same time welcoming area. A federating project, just as Europe itself." states Kristiaan Borret, Master Architect of the Brussels Capital Region.

“The Schuman square is an iconic site of EU decision-making. After years of neglect, this site deserves a redesign to live up to the expectations of 500 million European citizens, including more than one million Brussels residents. I am very happy with the decision taken by our region!” said Alain Hutchinson, Brussels Commissioner for Europe and International Organisations.

Additional studies will now be carried out with a view to submitting a permit by the end of 2018 and starting the works in 2019. 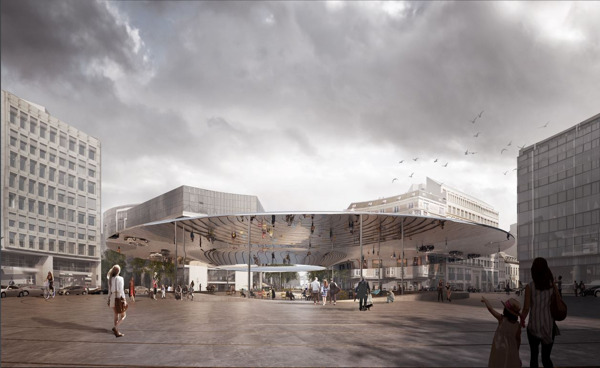