"This historical decision gives the inner ring a fresh look. Alongside the canal a new park is under construction at Porte de Ninove and this new project will provide cycling paths along the whole length of the inner city ring.  This government has clearly made the choice to become a city for people instead of a city for cars," says  Pascal Smet.

"The plans are the result of discussions with the mayors of the municipalities involved and different cycling associations.  The result: 12 km of separated cycling lanes and broad walkways. Brussels of tomorrow begins today," states Pascal Smet.

In addition to the construction of cycling lanes, existing parallel roads are redesigned to give priority to cyclists and pedestrians. This means streets where cyclists have priority over cars and broader sidewalks. Cyclists will be able to cycle in both directions in a fast and safe way. Access to underground parkings or access for deliveries will be guaranteed. The flow of traffic on the main road will be further improved by providing extra turning lanes at the intersections and a better fine-tuning of the traffic lights.

"The project also means some parking spots will have to disappear, but a large number of the 10,000 spots available in the area are currently unoccupied. From now on traffic will be concentrated on the main road and in the tunnels. Doing this allows us to give space to pedestrians, cyclists and people with reduced mobility: from 20 percent today up to 40 percent of space tomorrow," according to Pascal Smet.

"The inner city ring needs to be redesigned in order to make low intense traffic and multimodality possible. The planned cycling lanes are a first important step in that direction. The construction of these cycling lanes is linked to make car traffic more fluid on the main road. This project is therefore good for all," says Rudi Vervoort.

The mayors of Saint-Gilles, Saint-Josse-ten-Node and Brussels City were closely involved in the development of the project in order to guarantee safety and accessibility.

The first stage of the project started in March with the construction of a separated cycling lane on Avenue Poincaré between Porte de Ninove and Midi Station. The permit for the zone around Avenue Roi Baudouin has been delivered, and that for Madou will be delivered this week.

The works will be phased and coordinated with the tunnel renovations in order to limit the impact on traffic.

The remaining permits will be submitted in the coming days and weeks.  Brussels Mobility will inform residents and businesses during every new phase through information meetings, door-to-door-posts and a new website  www.petite-ceinture.brussels featuring the eight zones.

In order to celebrate this and to present the project to all Bruxellois, including expats, Brussels Mobility invites you to a ‘Bike Apero’ on Wednesday 29 March between 3 and 6 pm on the inner city Ring in front of the bookshop Filigranes. 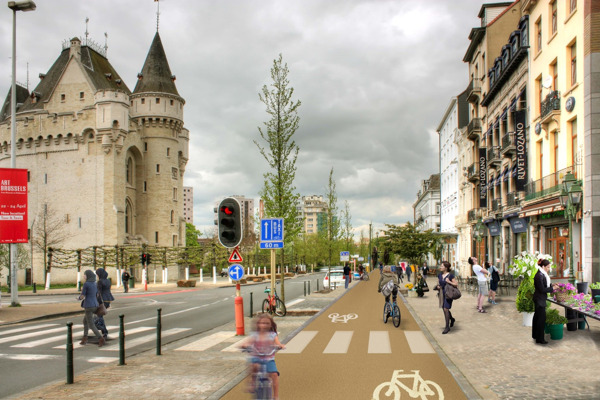